September 18th marks the 2nd anniversary of her graduation to heaven, and in recognition of the day, several promotional opportunities are presented so that her words can be widely read. These offers are good through 11:59 PM September 18th. 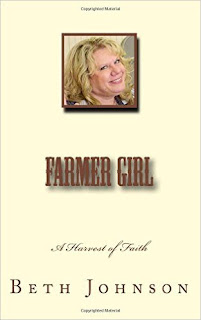 Promotion 1 - Buy one copy of Farmer Girl in hardback or paperback (ow.ly/W4OHH) and get one free. No limit. Email Amazon receipts with PROMO1 in subject to bill@johnsonacres.com along with address where free copy(ies) should be sent.

Promotion 2 - Free digital copy of any William E. Johnson book (http://amazon.com/author/johnsonacres) with purchase of Farmer Girl (ow.ly/W4OHH). Email Amazon receipt with PROMO2 in subject to bill@johnsonacres.com along with desired digital book, and specify either PDF or Kindle eBook format.

Promotion 3 - Free paperback copy of MY Grief Observed (ow.ly/2bvRMR) with each purchase of Farmer Girl (ow.ly/W4OHH). Email Amazon receipt with PROMO3 in subject to bill@johnsonacres.com along with address where free copy(ies) should be sent.

BONUS - With any of these promotions, receive either a digital copy of ANY of the above books, OR a paperback copy of MY Grief Observed, by including a link to an Amazon review you left of any of the above books. Just include the link to the review in the email and indicate which of the bonus gifts you prefer.

(Following is an excerpt from "Digging Into Romans" by William E. Johnson, coming soon to Amazon.com and in bookstores everywhere. )


I remind you that in the first three chapters of Romans, Paul is dealing with one primary topic - the universal need of mankind for the Savior.  He has described those who have never even heard the gospel, and concluded that they are in need of a Savior. He has discussed those who have a knowledge of God, and concluded that they, too, are in need of a Savior. And has talked about the most privileged of all - the Jews - a people specially called and chosen by God. His conclusion: They, too, are in need of the Savior.

In chapter 3, he anticipates some of the responses from his Jewish readers to that last assertion.  Notice the question that opens the section.  What advantage then has the Jew, or what is the profit of circumcision? (Romans 3:1 NKJV)  In other words, he anticipates his readers asking, "If the Jews need a Savior just like everybody else, what is the advantage of being  a Jew in the first place?" It's a valid question, isn't it?  What good is it to be a Jew if they are no different than anybody else?  What is the point?

Paul will deal with this elsewhere in the letter as well, especially when we get to chapters 9-11. And his answer both here and in that later section is that there was great advantage to being a Jew, and the thing that tops the list (and the only one he actually mentions here) is that they had the Bible! This people indeed were (and are) blessed by God in so many ways, but few things compare with the glorious gift God gave them in the Scriptures.  Paul had already touched on this truth in the previous chapter - Indeed you are called a Jew, and REST ON THE LAW, and make your boast in God, and KNOW HIS WILL, and approve the things that are excellent, BEING INSTRUCTED OUT OF THE LAW (Romans 2:17-18 NKJV). And he will mention it again and expand on it in chapter 9 - I tell the truth in Christ, I am not lying, my conscience also bearing me witness in the Holy Spirit, For I could wish that I myself were accursed from Christ for my brethren, my countrymen according to the flesh, who are Israelites, to whom pertain the adoption, the glory, the covenants, THE GIVING OF THE LAW, the service of God, and the promises; of whom are the fathers and from whom, according to the flesh, Christ came, who is over all, the eternally blessed God. Amen. (Romans 9:1, 3-5 NKJV)

So he reminds them in vs. 2 that the thing that sets them apart from others is this - they had the Bible! Moses had said the same thing - For what great nation is there that has God so near to it, as the LORD our God is to us, for whatever reason we may call upon Him? And WHAT GREAT NATION IS THERE THAT HAS SUCH STATUTES AND RIGHTEOUS JUDGMENTS AS ARE IN ALL THIS LAW which I set before you this day? (Deuteronomy 4:7-8 NKJV). The Psalmist said it, too - He has not dealt thus with any nation; And as for His judgments, they have not known them. Praise the LORD! (Psalms 147:20 NKJV). Think of the wonder of it - God had given them His Word.  No other people had been so blessed, and no other nation had been so gifted.  The very Word of God was entrusted to them and to no one else. They were not like those in far off lands who were limited in their understanding of God. They did not need to rely only on the limited light of conscience or natural revelation. They had the Law! They had the words of God! They had the BIBLE!

Click here for more books and eBooks by William E. Johnson, including the recently released "Digging Into the Acts of the Apostles" (in two volumes)
Posted by Pastor Bill at 1:32 PM No comments: